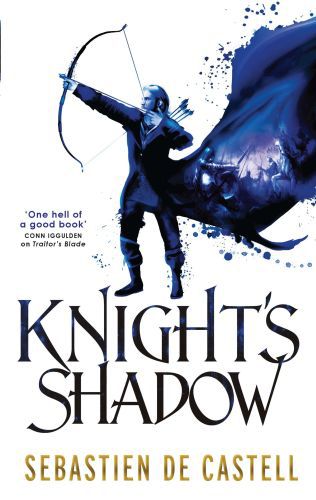 "Tristia is a nation overcome by intrigue and corruption. The idealistic young King Paelis is dead and the Greatcoats - legendary travelling magistrates who brought justice to the Kingdom - have been branded as traitors. But just before his head was impaled on a spike, the King swore each of his hundred and forty-four Greatcoats to a different mission.

Falcio Val Mond, First Cantor, with the help of fellow Greatcoats Kest and Brasti, has completed his King's final task: he has found his Charoites - well, one at least, and she was not quite what they expected. Now they must protect the girl from the many who would see her dead, and place her on the throne of a lawless kingdom. That would be simple enough, if it weren't for the Daishini, an equally legendary band of assassins, getting in their way, not to forget the Dukes who are determined to hold on to their fractured Kingdoms, or the fact that the heir to the throne is only thirteen years old. Oh, and the poison that is slowly killing Falcio.

That's not even mentioning the Greatcoat's Lament..."