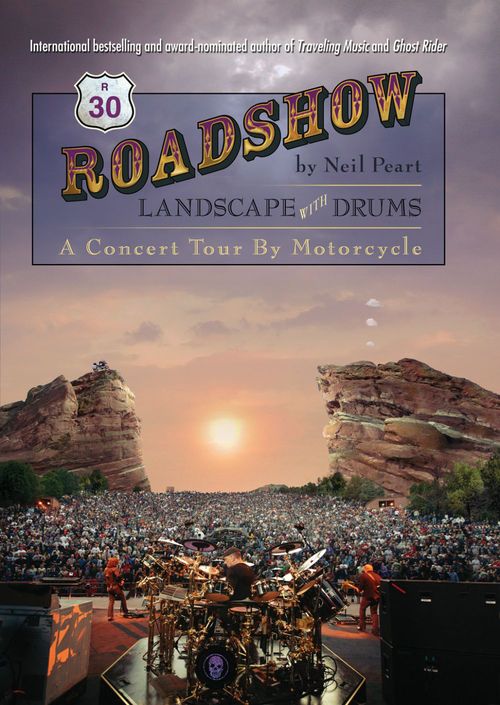 For thirty years, drummer, author, and songwriter Neil Peart had wanted to write a book about "the biggest journey of all in my restless existence: the life of a touring musician." Finally, the right time, and the right tour . . .

In the summer of 2004, after three decades, twenty gold albums, and thousands of performances spanning four continents, the band Rush embarked on a celebratory 30th Anniversary World Tour. The "R30" tour traveled to nine countries, where the band performed fifty-seven shows in front of more than half a million fans. Uniquely, Peart chose to do his between-show traveling by motorcycle, riding 21,000 miles of back roads and highways in North America and Europe - from Appalachian hamlets and Western deserts to Scottish castles and Alpine passes.

Roadshow illuminates the daunting rigors of a major international concert tour, as well as Peart's exploration of the scenic byways and country towns along the way. His evocative and entertaining prose carries the reader through every performance and every journey, sharing the bittersweet reflections triggered by the endlessly unfolding landscape. Observations and reflections range from the poignantly, achingly personal to the wickedly
irreverent.

Part behind-the-scenes memoir, part existential travelogue, Roadshow winds through nineteen countries on both sides of the Atlantic, in search of the perfect show, the perfect meal, the perfect road, and an elusive inner satisfaction that comes only with the recognition that the journey itself is the ultimate destination.

The inner workings of the tour, the people Peart works with and the people he meets, the roads and stages and ever-changing scenery - all flow into an irresistible story.