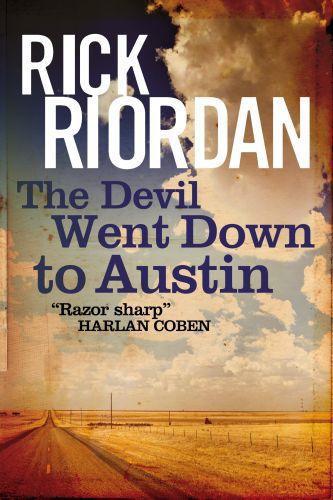 The Devil Went Down to Austin

From the #1 New York Times bestselling author of the Percy Jackson and the Olympians series
Rick Riordan, triple-crown winner of the Edgar, Anthony, and Shamus Awards, brings his fast-talking, hard-living, Texas-hip P.I. Tres Navarre to the heart of the Lone Star State--Austin--to unravel a case so dark, twisted, and deadly, it can only involve family....
Tres Navarre, the P.I. with a Ph.D. in literature, heads to Austin for a laid-back summer teaching gig. But he’s in store for a whole lot more. His big brother Garrett--computer whiz, Jimmy Buffett fanatic, and all-around eccentric--is hoping to retire a multimillionaire by the fall. He’s bet his career and the Navarre family ranch to do it.
Then Garrett’s oldest friend and business partner is murdered--and Garrett is the only suspect. As Tres delves into Garrett’s bizarre world to find the truth behind the murder, he comes face to face with the damaged relationships, violent lives, and billion-dollar schemes of a high-tech world gone haywire. Connecting them all is beautiful Lake Travis and the shocking secret that lies within its depths. Now, as Tres struggles with his own troubled family past and to clear his brother’ s name, he finds himself stalked by a cold-blooded killer--one who could spell the death of both Navarres.